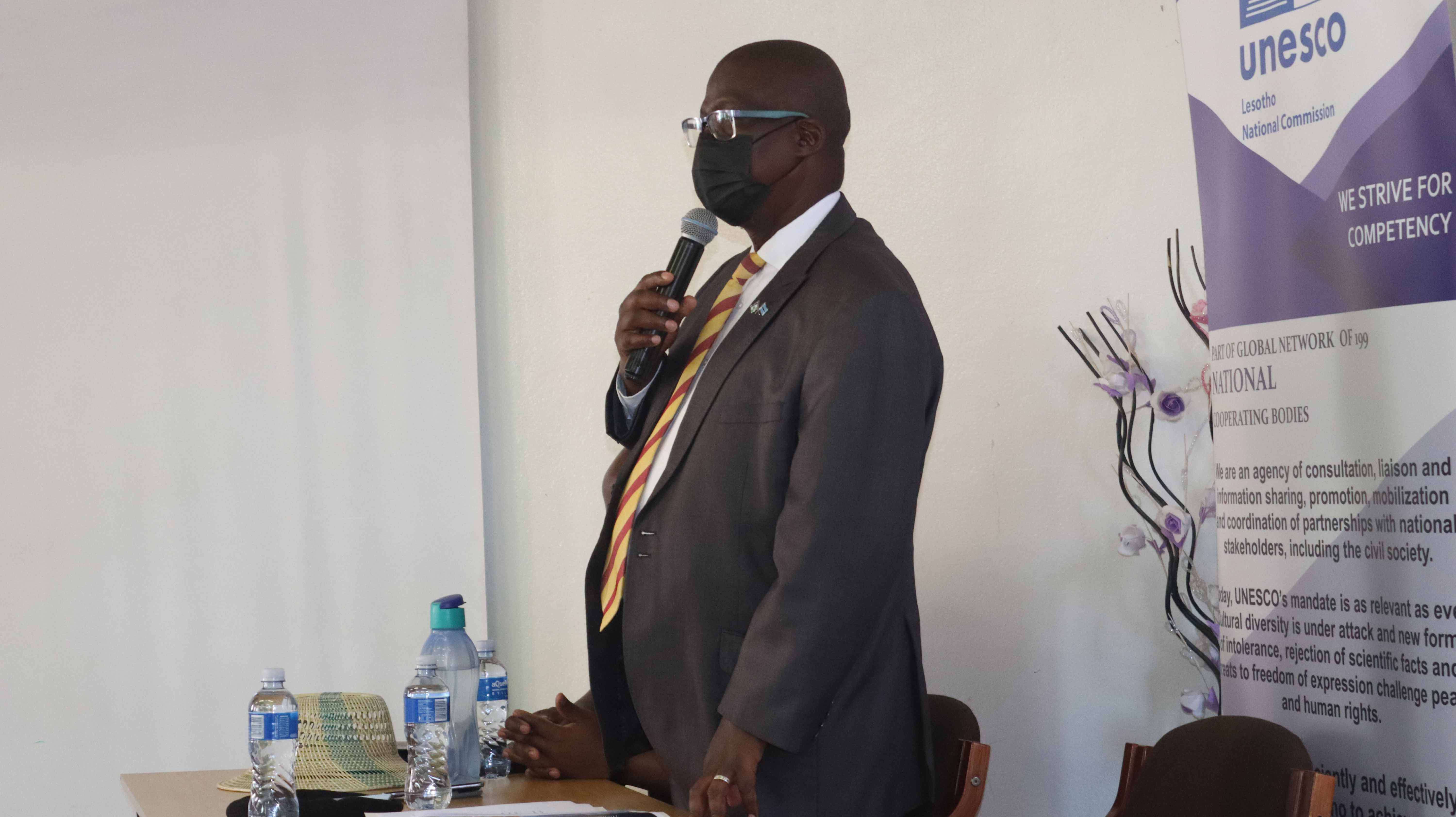 THE MINISTER OF COMMUNICATIONS, SCIENCE AND TECHNOLOGY (MCST), HONOURABLE TS’OINYANA RAPAPA’S SPEECH AT THE WORLD PRESS FREEDOM DAY (WPFD) AT UNESCO HALL, MASERU ON MAY 03, 2022

In dark times, people need light and journalism at its best can provide it.

It gives me great pleasure to officiate at this year’s World Press Freedom Day (WPFD), which is being commemorated just two days after International Workers Day (IWD). This year’s WPFD theme is ‘Digital Media under Seize.’

Stories told with style and attachment to the values of press freedom help people better understand the complex world in which we live.

In the face of deepening global communication explosion, terrorism and conflict, climate change, poverty and disease, there is even a greater need for journalism to break down walls of prejudice, ignorance and powerlessness and for media to be watchdog of Government.

That is not easy in the age of internet when there is no such concept as local news. At the click of a mouse, the parochial becomes global and people in their hundreds of millions are connected at their mobile phones and computers or through their telephones in ways which were unthinkable even a few years ago.

The World Press Freedom Day was proclaimed by the UN General Assembly in 1993 following a recommendation adopted at the twenty-sixth session of UNESCO's General Conference in 1991.

The theme seeks to bring together on this very special day: journalists, media representatives, and activists, cybersecurity managers and legal experts including policy makers to develop concrete solutions meant to tackle threats posed by increased surveillance to press freedom and privacy. This in turn was a response to a call by African journalists who in 1991 produced the landmark Windhoek Declaration on media pluralism and independence.

May 03 further serves as a reminder to Governments of the need to respect their commitment towards press freedom. It is also a day of re-thinking among media professionals about issues of press freedom and professional ethics.

Most importantly, the world press freedom Day is a day of support for media which are targets for the restraint, especially during this era of technology when information is moving at a rapid rate thus posing challenges such as forged information in circulation in different social platforms amongst others. With the convergence of modern technologies, everybody is in possession of the modern devises, easy access to global information and social media platforms in which all of us can publish information without verification or even half-baked truth.

Despite, the threats imposed by the Information Age, the government considers use of these platforms as an important tool to operationalise democracy and good governance, and with the implementation of relevant policies to guide and guard against misuse.

With policies in place the government of Lesotho will safely use these platforms to facilitate the implementation of all pillars of government.

In particular, be used for making easy access to government information and to foster greater transparency, collaborative relationship with public and a stronger sense of ownership of government policies and services. This will lead to greater public trust and accountability.

On the other hand, these technologies enable business entities to improve consumer process and better marketing of goods and services, encourages citizenry participation for democratic and socioeconomic discourse. The government also considers the existence of these platforms as an opportunity to achieve the pillars of sustainable development, preservation of culture, conservation of environment and good governance and expansion of these pillars into nine domains shall be the foundation of our national media policy.

Today, also provide an opportunity to remember those journalists who lost their lives in the pursuit of a news story (Moment of Silence for Fallen Journalists, heroes and heroines).

Nevertheless, there is need for more collaboration amongst all media stakeholders to work together in an attempt to curb challenges facing digital media today.

Barrack Obama once said; “We have to uphold a free press and freedom of speech because, in the end, lies and misinformation are no match for the truth”.

Another politician by the name of Nelson Mandela, says, “A free press is one of the pillars of democracy”.

Another American President Thomas Jefferson, once said, “Our liberty depends on freedom of the Press and that cannot be limited without being lost”.

While, MahadMagandi says, “Freedom of the press is a precious privilege that no country can forego”.

In closing, I call upon all Journalists across the globe, particularly Lesotho through support of UNESCO and MISA Lesotho to continue making a landmark in the area of media pluralism and independence.